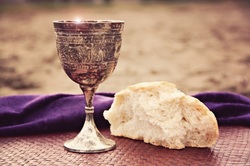 First Holy Communion includes a  family preparation program  reinforced by the  Wednesday night Religious Education classes in second grade. Contact Mary Luebke for info at 608-526-4424.
The Reception of Holy Communion
In the United States, the body of Bishops determined that Communion should be received standing, and that a bow is the act of reverence made by those receiving. These norms may require some adjustment on the part of those who have been used to other practices, however the significance of unity in posture and gesture as a symbol of our unity as members of the one body of Christ should be the governing factor in our own actions.
Those who receive Communion may receive either in the hand or on the tongue, and the decision should be that of the individual receiving, not of the person distributing Communion. If Communion is received in the hand, the hands should first of all be clean. If one is right handed the left hand should rest upon the right. The host will then be laid in the palm of the left hand and then taken by the right hand to the mouth. If one is left-handed this is reversed. It is not appropriate to reach out with the fingers and take the host from the person distributing.
The person distributing Communion says audibly to each person approaching, "The Body of Christ."  This formula should not be altered, as it is a proclamation which calls for a response of faith on the part of the one who receives. The communicant should audibly respond, "Amen," indicating by that response his or her belief that this small wafer of bread, the wine in this chalice are in reality the body and blood of Christ the Lord.
When one receives from the chalice, the same proclamation is made by the person distributing Communion and the Communicant again responds, "Amen." It should be noted that it is never permissible for a person to dip the host he or she has received into the chalice. If, for some reason, the communicant is not able or willing to drink from the cup then that person should receive only under the form of bread.  United States Conference of Catholic Bishops
​